The Sheriff and Mental Illness

Law enforcement officials are faced with mental illness everyday, including in their own ranks as the recent rash of suicides by police officers sadly testifies.  But they rarely see it as part of their duty to do anything but lock up mentally ill offenders.  The sheriff of Cook County, Illinois, of which Chicago is a part, takes a very different point of view.  Although I am from the area, I had not realized his many efforts to deal with the issue until I read the following article from The Economist no less. I am pleased to share it as a hopeful step in the right direction. 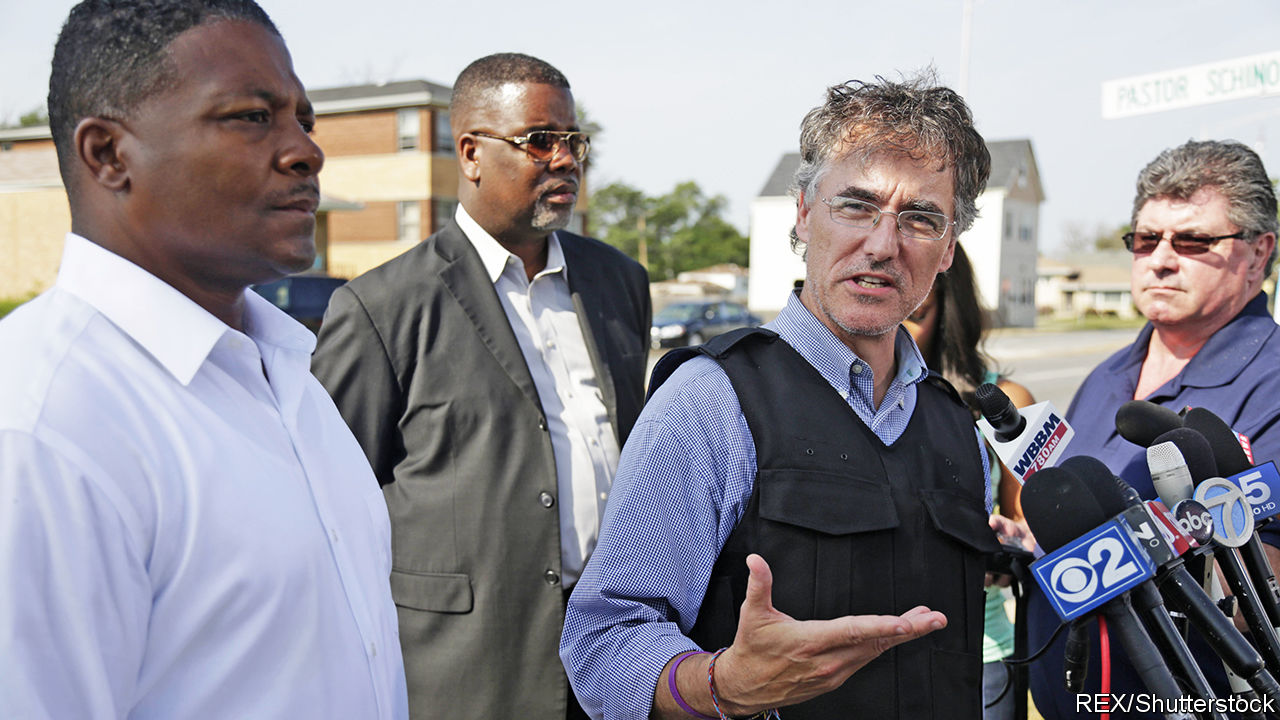 When it comes to the treatment of mentally ill people, says Tom Dart, “in future people will look back and call us evil.” Mr Dart, who serves Cook County in Illinois, may be the most interesting sheriff in the country. America locks up the mentally frail “out of indifference”, he says. Behind bars, with few officers trained to help, the sick grow more troubled and likely to reoffend.

In Chicago Rahm Emanuel, the previous mayor, closed six of 12 public-health clinics in 2012. Sheriff Dart thinks that resulted in more ill people losing their way, going off medication, getting arrested and being dumped in his gargantuan, crumbling jail on the city’s South Side. His staff say that of nearly 40,000 people who pass through yearly, 37% (as of mid-July) suffer some form of mental ailment.

Early in his term (he was first elected in 2006) the sheriff, a former Illinois lawmaker, tried raising awareness. He calls the neglect of mental health chronic, inhumane and costly. Imagine if we treated diabetes by locking sufferers in a small room, he says. But as Alisa Roth writes in “Insane”, published last year, the prison system has been known as a warehouse for the mentally ill for decades. She cites a federal study that suggests 75% of female detainees suffer mental illness.

The sheriff’s response has been to try making his jail “the best mental-health hospital” possible. He has done away with solitary confinement, a practice which has long been known to cause and worsen mental woes. (Doing so has also cut staff assaults, he says). He appointed psychologists as jail directors and hired medically trained staff in place of some guards. Inmates can take courses in yoga, chess and other activities intended to rehabilitate.

Spend a day in his jail and much appears unusual for a place of detention. In a damp and gloomy basement, prison workers hand out questionnaires to men arrested the night before. They scramble to see inmates before they go before a bail judge (who will release most the same day), to get a chance to diagnose the mentally ill, see who gets treatment and offer care.

For those kept inside—the jail holds some 6,000 detainees at a time, many for three-to-six months—further diagnosis and treatment follows. Staff in a beige hospital building distinguish between 1,600 inmates, currently, who are “higher-functioning” for example with depression, 382 of “marginal stability”, perhaps with schizophrenia, and 80 who suffer the most acute psychosis. The last are the hardest to manage, let alone release safely.

Treatment includes antidepressants and other medical care, getting sober, and counselling to address low self-esteem. “We diagnose, prescribe and treat, offer therapeutic classes, hotlines for families, and have a discharge plan like a hospital,” says Mr Dart. In one cell block a psychiatrist leads 40 women in blue jail smocks in a lively, if scripted, discussion of how to seek self-forgiveness. The women read poetry, talk of betrayal and of shaking off addiction. Over half are hooked on heroin, says an official. A gaunt detainee tells how she struggles with anger, “but I don’t think I’m the same person as when I came in, I used to lash out at every little thing.”

Therapy sessions for male detainees bring forth stories of isolation, absent parents, addiction, violence, fear and arrests. A 25-year-old, Jesus Saenz, says he has been to the county jail 30 times. He laments years lost to cocaine and pcp, gangs, depression and bi-polar disorder. After medical care and months of counselling he now vows to stay clean and get a job. “They helped me stop my bullshit, hurting other people,” he says.

What chance does Mr Dart have of succeeding? Some anecdotes are cheering, but measurement is tricky beyond looking at rates of rearrests. Reoffending in the first ten days of release is down sharply, says the sheriff. A pilot project gives the most vulnerable help to find housing, food and clothing on release. Some are driven home, not just dumped outside the jailhouse door. But longer-term rates of rearrest are not yet noticeably down, he concedes.

The jail population has shrunk by half since Sheriff Dart came in. That is explained by many things, including generally lower rates of arrest by police in the past three years. Bond reform, passed in 2017, is also a factor. Bail is rarely set at thousands of dollars, so fewer are jailed merely for being poor. This has freed up resources for better health care, as did closing a military-style boot camp in the jail. Mr Dart is convinced data will eventually show overall benefits, once experts from the University of Chicago and elsewhere have had time to track outcomes.

What’s in a badge

Beyond the jail walls he is trying other experiments, rethinking the role of the sheriff’s office and deploying his nearly 7,000 staff in ways his predecessors never imagined. There are over 3,000 sheriffs across America, law officers whose duties are limited mostly to policing and enforcing court orders. Under Mr Dart’s expansive view, the office can be a form of alternative government. His mandate is so nebulous, he argues, it amounts to “outrageously broad powers” for a willing sheriff, especially beyond city borders (his county includes 130 towns and villages outside Chicago). He tries what he calls “wildly different stuff…to make my job more bizarre.”

Examples include his office helping the mayor of a depopulated, crime-ridden and poor town, Ford Heights, to fix its public lighting and water, build a baseball diamond and replace a defunct police force. Elsewhere he has clashed with banks, by refusing to evict homeowners who are behind on mortgages. He resisted even facing threats of contempt orders against him personally. He called the evictions unjust for a “thoughtful society”.

Mr Dart campaigned to close Backpage.com, a website shuttered by federal authorities for hosting adverts for human trafficking and prostitution. And in Chicago he deployed officers to promote community policing—to build trust among residents in especially violent areas—even when city police, at first, seemed reluctant to accept help. Not all these efforts succeed. But through his willingness to try new things until someone stops him, and his enthusiasm for clashing with Democratic power-brokers in Springfield like the House Speaker, Mike Madigan, Mr Dart has reimagined what a sheriff can be.■