What Does a Photo Reveal?

Walter Freeman, the lobotomist, loved photography.  He took head and shoulder pictures of his patients before, during and after the procedure and sometimes even later in life.  He used these photographs in his professional publications to show the, always, beneficial effects of a lobotomy.  Although he and his neurosurgeon colleague James Watts had failures, it was not these photographs which showed up in print.

Generally, the before pictures are of very morose and unhappy individuals and the after of decidedly cheerier aspect.  Below are some of the images: 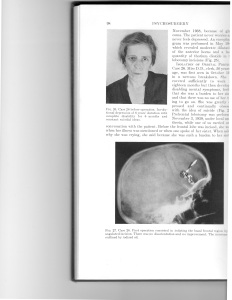 Freeman never used my mother’s photos in his publications.  When I look at her before photograph I do not see a woman in great distress.  Her eyes are bright; she has bothered to put on make-up and wear jewelry.  After the lobotomy she ended up institutionalized and when Freeman visited her, he dutifully took a photograph.

Ironically, it was her treatment at the mental health institution which allowed my mother to return to a relatively normal life, although as my aunt said, she had lost her “sparkle.”  In 1959 he visited my mother, as he did many of his patients, and took another picture.  He counted my mother as one of his successes, but she was not his success.  She was the success of the staff of the Independence Mental Health Institute.