Empathy or the Lack Thereof 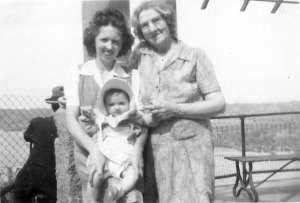 Mom, Pearl and me in Dubuque

As I read over family letters and looked at family photographs in preparation to write Examined Lives, I discovered that in my early years I had more contact with my grandmother Pearl than I had realized. There was visiting to Dubuque where I was living with my mother during World War II and then later more visiting back and forth of the entire families between Chicago, where Pearl, Louis and Christine lived, and Maryland where my mother, father and I settled after the war.

It, therefore, hurt and angered me to have her refer to me as a “stranger” when she came to take care of my brother and me in Maryland after our mother was institutionalized. It particularly rankled as I read a letter she wrote her daughter Christine about the meanness she had experienced as a young girl. She was a woman incapable of empathy. Empathy involves being able to put oneself in another’s shoes. She could not do that. It probably never dawned on her that she was being mean when she criticized and slapped me, although she herself felt deeply a meanness done to her many years earlier.

Dearest:  Altho I am expecting to talk with you after [a] bit and it hasn’t been very long since you left, I tho’t I would commence a letter. Am not trying to get at things very much as have been congitating somewhat on the peculiar dispositions of some and one wonders what it is that makes some people want to be hurtful. Made me recall that time when I was a little girl, when another little girl “admired” my long fine hair, so she could tangle it with cockleburs.  While I was hurt and disillusioned at the falsity and meanness of it, yet I would rather be the one who got the cockleburs (which I was) than the one who could feel mean and sly enough to do it. Guess one has to concentrate their minds on the ones they feel sure wouldn’t be that way.

As I explored Pearl’s life further, I made an effort to go beyond my anger to try to empathize with the 30-year-old woman whom I encountered in letters to my grandfather Louis. She came from a close-knit family, three brothers and a sister but two of the brothers and the sister had married and left home. She spent most of her 20’s as a school teacher at five different schools, a continual stranger in the community, passed around from house to house as was the custom for boarding teachers in those days. She had to leave one school because she developed “nervous chills” and was advised by a doctor to quit her job; she left another because of her mother’s illness. When her mother died, she was left to housekeep for her eldest brother and her father, who were rarely home. She was desperately lonely. The letters show that she had many friends and participated as an officer in her local church. But somehow that was not enough. The loneliness was so deep-seated that it made her ill with migraine headaches.

While I have not outgrown my anger at the Pearl I knew as a lonely seven-year-old child who had lost her mother to mental illness. I can, however, empathize with the lonely woman of the letters. I only wish her own experiences would have taught her how to deal with the loneliness of others.